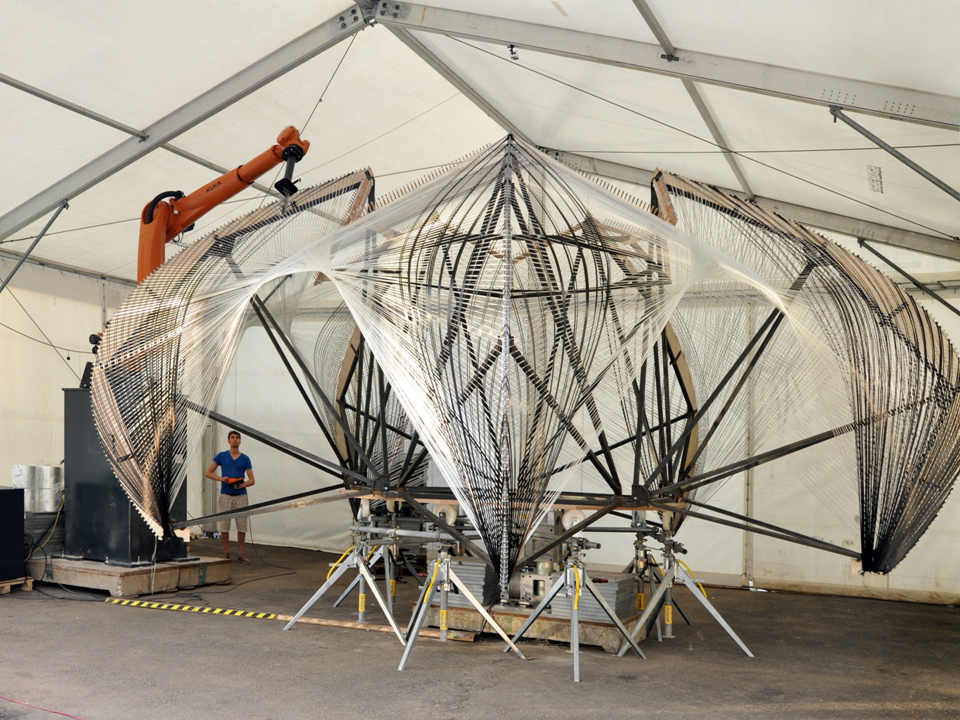 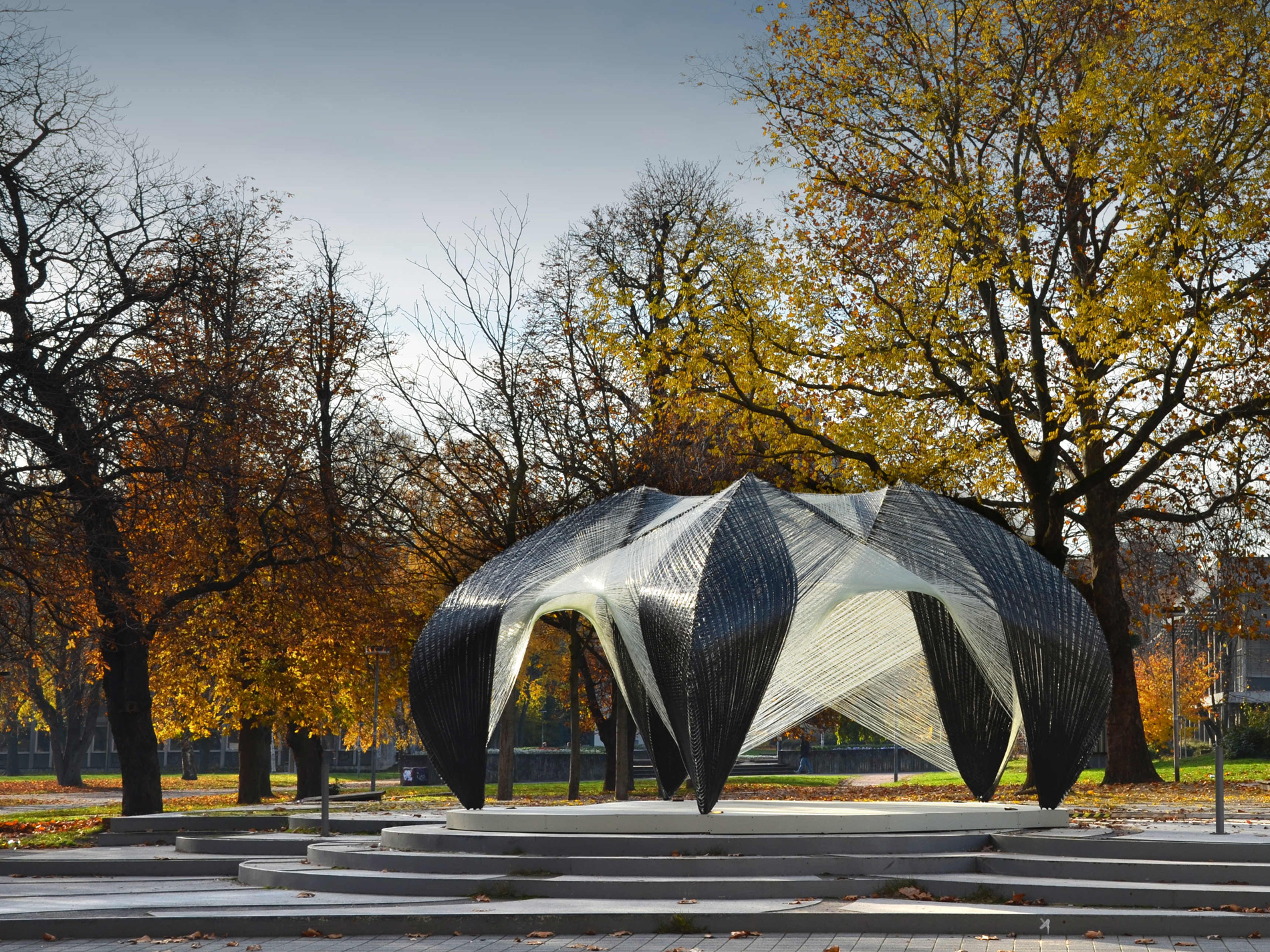 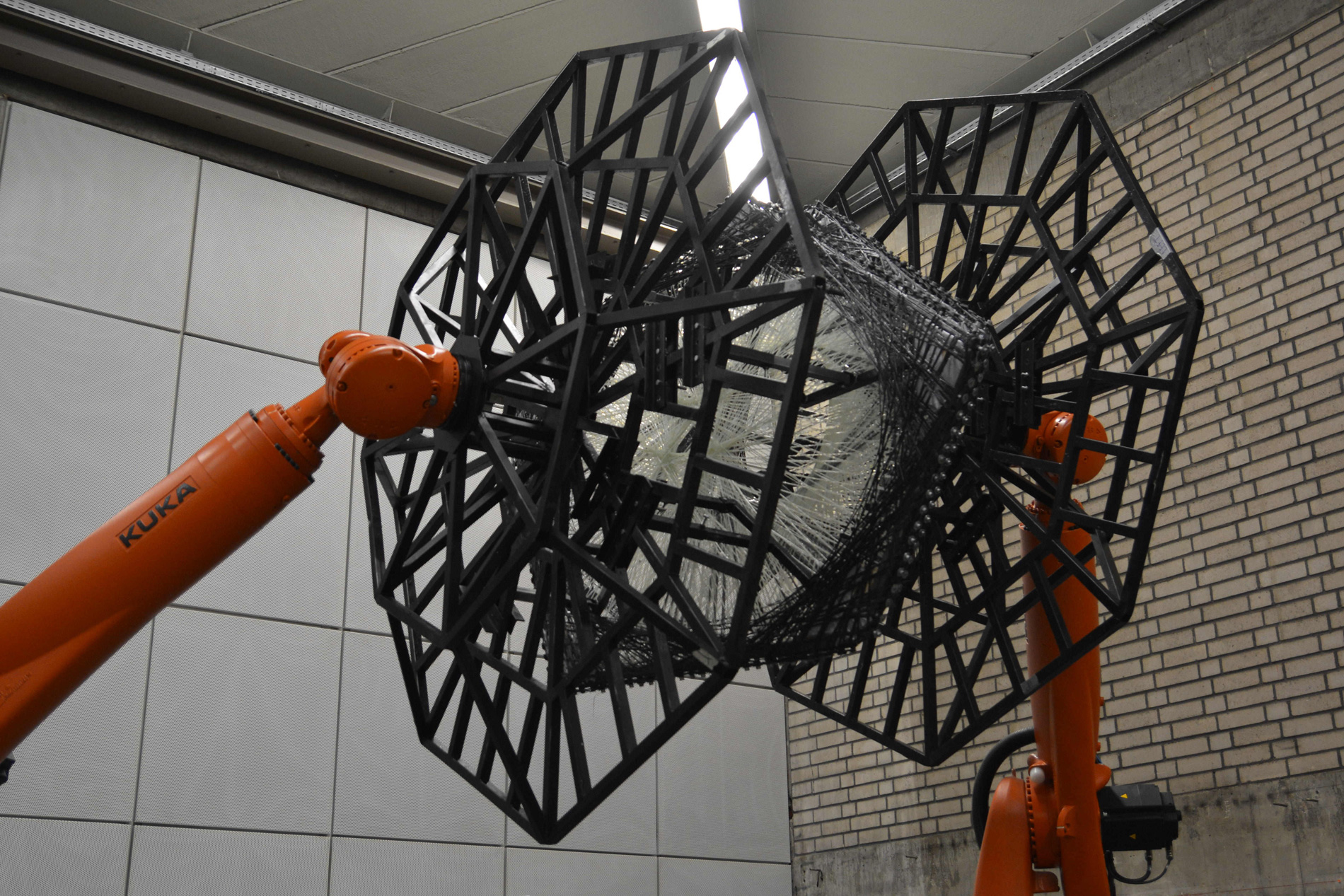 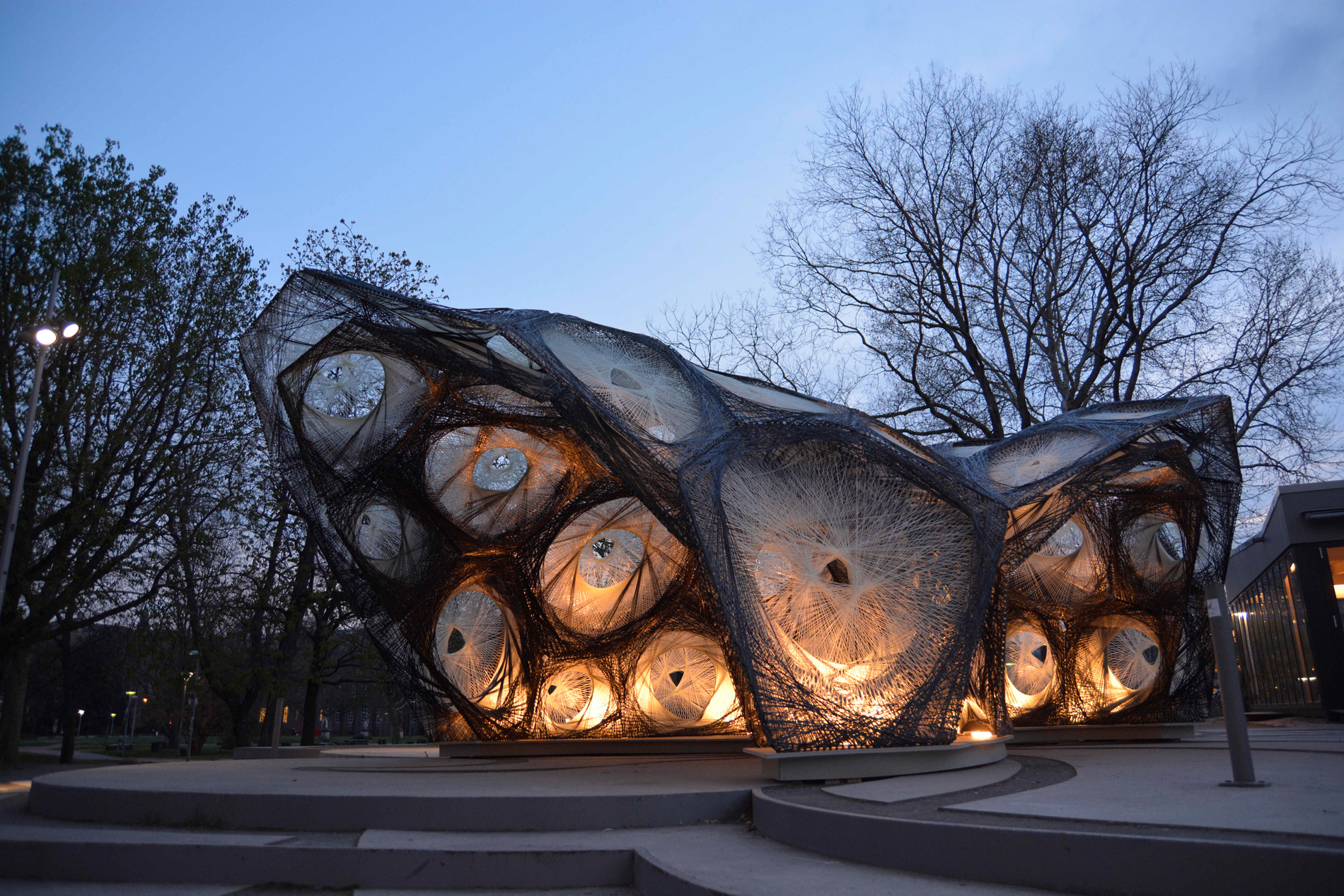 Virtual prototyping replaces material/physical prototyping by simulating the fabrication processes: the machining, material interaction and forming stages to test and evaluate system performance. It is the proposal of this project to apply a virtual prototyping methodology to the FRP fabrication method “Coreless Fibre Winding”, that has been under development at the ITKE and ICD at the University of Stuttgart since 2012.

This process involves the winding of Carbon and Glass-Fibre around minimal structural frameworks utilising robotic placement methods. The resulting, programmed, fibre-fibre interaction between these frames can be used to generate complex geometries.

James Solly is a Research Associate and tutor at the Institute of Building Structures and Structural Design (itke) (http://www.itke.uni-stuttgart.de/) at the University of Stuttgart.
He completed a Master’s in Engineering Science at the University of Oxford in 2008 before working with Ramboll UK and BuroHappold Engineering until 2015 on the design and realisation of computationally or geometrically complex… read more

The ITKE and ICD have been awarded the Publication Prize of the University of Stuttgart 2017 for their paper “Elytra Filament Pavilion: Robotic Filament Winding for Structural Composite Building Systems” which was presented at the Fabricate 2017 Conference in Stuttgart. The award was presented to the paper authors, Marshall Prado, Moritz Dörstelmann, James Solly (Innochain... read more

This post is somewhat late, but taking advantage of the new Innochain data repository, here is the paper presented at CICE 2016 by James Solly (ESR08) on behalf of his co-authors Professor Jan Knippers and researchers Valentin Koslowski and Timo Fildhuth. https://zenodo.org/record/1063908#.WhPkpzeDOUl Additionally, the full proceedings of CICE can be found here: https://www.iifc.org/publications/proceedings-iifc-official-conferences/ although they... read more

Acadia 2017 James (ESR08) and Sam (ESR12) both attended the Acadia 2017 “Disciplines and Disruption” Conference at MIT in Boston, 2nd-4th November 2017. During the conference, our colleagues from the ICD (Institute of Computational Design and Construction) presented the paper: Multi-Machine Fabrication: An Integrative Design Process Utilising an Autonomous UAV and Industrial Robots for the... read more

IRREGULAR CABLE-NETS: EXPLORING IRREGULARITY AS A DRIVER FOR FORM AND STRUCTURE

Unlike conventional cable-nets that typically use evenly spaced cables laid out in an orthogonal-grid, introducing irregular patterns into the form-finding process of cable structures enables designs with non-directional grids and varying cable concentration. read more

The Elytra Filament Pavilion has received the German Design Award 2018 in the Architecture Category. Innochain researcher James Solly (ESR08) was a member of the multidiscplinary team of engineers and architects from the ITKE and ICD at the University of Stuttgart who designed and realised this large-scale technology demonstrator. The German Design Award is conferred... read more

Fabricate 2017 Paper on the Elytra Pavilion Innochain ESR James Solly (ESR08), working on the research topic Virtual Prototyping FRP, presented at the Fabricate 2017 conference in Stuttgart, Germany in April 2017 alongside co-authors Marshall Prado and Moritz Doerstelmann of the ICD. Their conference paper can be found in the full proceedings (page 224), which... read more

The Elytra Filament Pavilion at the Vitra Campus

Relocating a Modular Fibrous Pavilion Following it’s highly successful premiere at the V&A Museum in London, the Elytra Filament Pavilion was demounted, transported to southern Germany and reinstalled at the Vitra Campus in Weil am Rhein. The Vitra Campus is a field of experimentation for architecture and design and world renowned for its exquisite accumulation... read more

The Elytra Filament Pavilion is the central installation of the Engineering Season at the Victoria and Albert Museum in London, which highlights the creative potential of integrated design engineering through a series of exhibitions and events. read more

ESR08- Virtual Prototyping FRP AUTHOR: JAMES SOLLY   There are a multitude of forming processes available for the fabrication of Fibre-Reinforced Polymer (FRP) components, from simple hand lay-ups to heavily automated industrial processes. “Coreless Filament Winding” is a variation on typing filament winding methods that has been jointly developed by Innochain Partner the Institute of... read more

James Solly is a Research Associate and tutor at the Institute of Building Structures and Structural Design (itke) (http://www.itke.uni-stuttgart.de/) at the University of Stuttgart. read more