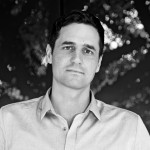 Michael Knauß is a founding partner of ROK – Rippmann Oesterle Knauss. He studied architecture at the ETH Zurich and the University of Stuttgart where he earned his Dipl.-Ing. degree in 2007. He worked at the Chair for Architecture and Digital Fabrication with Professors Gramazio and Kohler at ETH Zurich where he headed research and teaching projects with a focus on robotic timber construction. His work at the ETH Zurich was widely published and exhibited internationally. Since 2016 he is a lecturer at the Aarhus School of Architecture. Michael gained design experience in the offices of UNStudio (Amsterdam, 2007),Gramazio & Kohler (Zürich, 2006) and LAVA (Stuttgart, 2007). He has given lectures at various academic institutions including IAAC Barcelona, the Harvard GSD and the USI in Mendrisio.