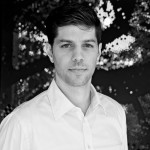 Silvan Oesterle is a founding partner of ROK – Rippmann Oesterle Knauss. He studied architecture at ETH Zurich where he earned a Master of Science in Architecture in 2007. On graduation he joined the Faculty of Architecture at ETH Zurich where he taught and conducted research with Professors Gramazio and Kohler at the chair for Architecture and Digital Fabrication. Since 2014 he is a lecturer at the Accademia di architettura di Mendrisio. In 2013 he was a guest lecturer at the Academy of Fine Arts in Stuttgart with the class of Prof. Tobias Wallisser. Prior to this he worked as a designer for UNStudio (Amsterdam, 2007), Gramazio & Kohler (Zürich, 2006) and Riarch (New York, 2004). Silvan has given lectures at various schools, conferences and offices amongst which are the Architectural Association School of Architecture (London), CITA (Copenhagen), the Smart Geometry Conference (Munich) and ACADIA2009 (Chicago). In 2012 Silvan and his team at ETH received the Global Holcim Inovation Award.