Robot-Build Pavillion for the V&A in London 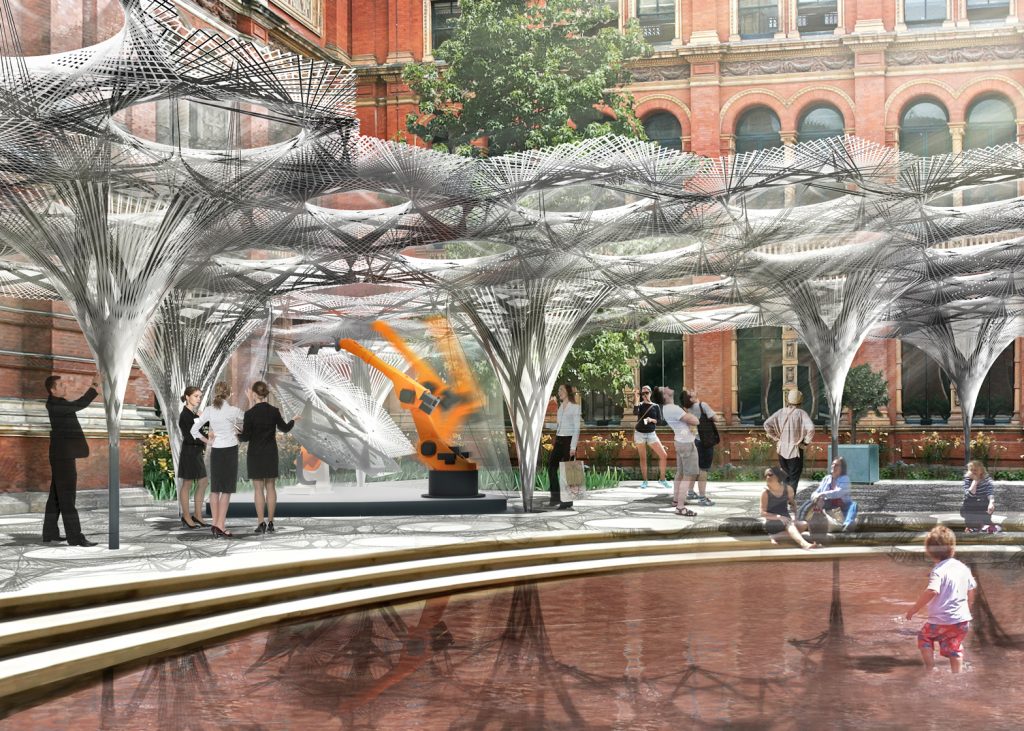 The Innochain ESRs at ITKE in Stuttgart are collaborating with Achim Menges and Jan Knippers on the design and fabrication of the Elytra Filament Pavilion. The undulating and web-like structure of the canopy will be based on the fibrous structures found in the hardened forewings of flying beetles, known as elytra. The construction of the pavilion made from Glasfibre filament will continue over the duration of the season, between May and November, with new cells fabricated in response to data collected by sensors in the canopy fibres.

From the pressrelease of the V&A:

“A newly-commissioned Garden installation by experimental architect Achim Menges with Moritz Dörstelmann, structural engineer Jan Knippers and climate engineer Thomas Auer will launch the Season. Their first ever public commission in the UK, Elytra Filament Pavilion will explore the impact of emerging robotic technologies on architectural design, engineering and making. Inspired by a lightweight construction principle found in nature, the fibrous structures of the forewing shells of flying beetles known as elytra, the Pavilion will be an undulating
canopy of tightly-woven carbon fibre cells created using a novel robotic production process. The Pavilion will grow over the course of the V&A Engineering Season in response to data on structural behaviour and patterns of inhabitation of the Garden that will be captured by realtime sensors in its canopy fibres. At select moments, visitors will have the opportunity to witness the Pavilion’s construction live throughout the Season as new cells are fabricated insitu by a Kuka robot. Menges’ and Knippers’ institutes at Stuttgart University are pioneering the integration of biomimicry, robotic fabrication and new materials research in architecture and have recently completed several innovative projects in Germany.”